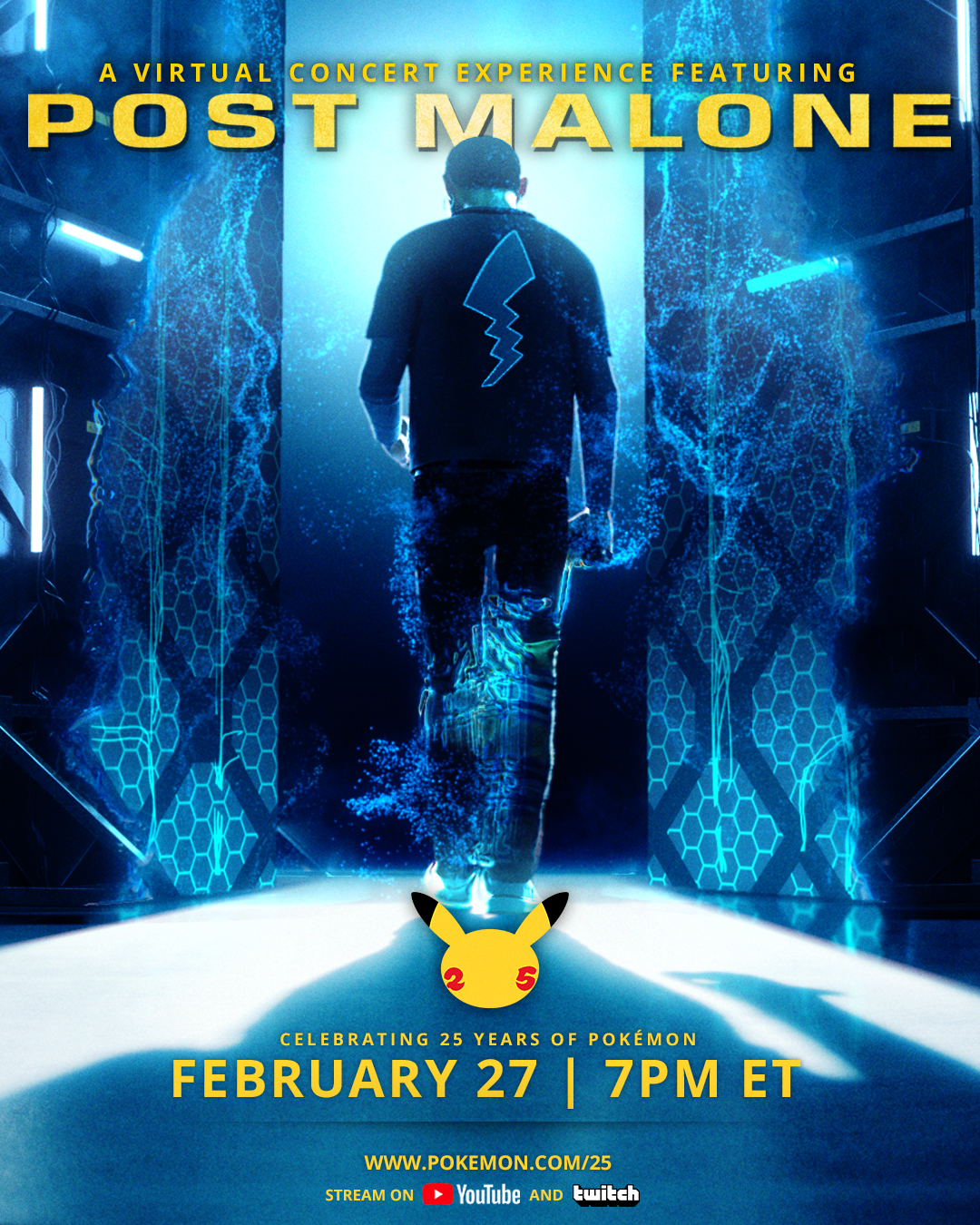 Earlier this week, The Pokémon Company International revealed their plans for a range of events and activities for this year's Pokémon Day on February 27th, and for the week leading up to the day.

The P25Music project in collaboration with Universal Music Group once again takes centre stage in these announcements, with the unveiling of details about a online virtual concert for Pokémon Day featuring Post Malone. The concert will be streamed for free from 7:00 p.m. EST / 4:00 p.m. PST on February 27th on Pokémon's official YouTube channel, official Twitch channel, and on the Pokémon’s 25th anniversary website. Ahead of the concert stream, a special selection of music-themed Pokémon anime episodes will be streamed on Pokémon TV.

Ahead of this concert, a special password will be distributed on February 25th for trainers to obtain a special Pikachu in Pokémon Sword and Shield. This Pikachu will know the move Sing, and is holding a Light Ball. The Pokémon Company International also promised additional announcements throughout the week leading up to Pokémon Day. 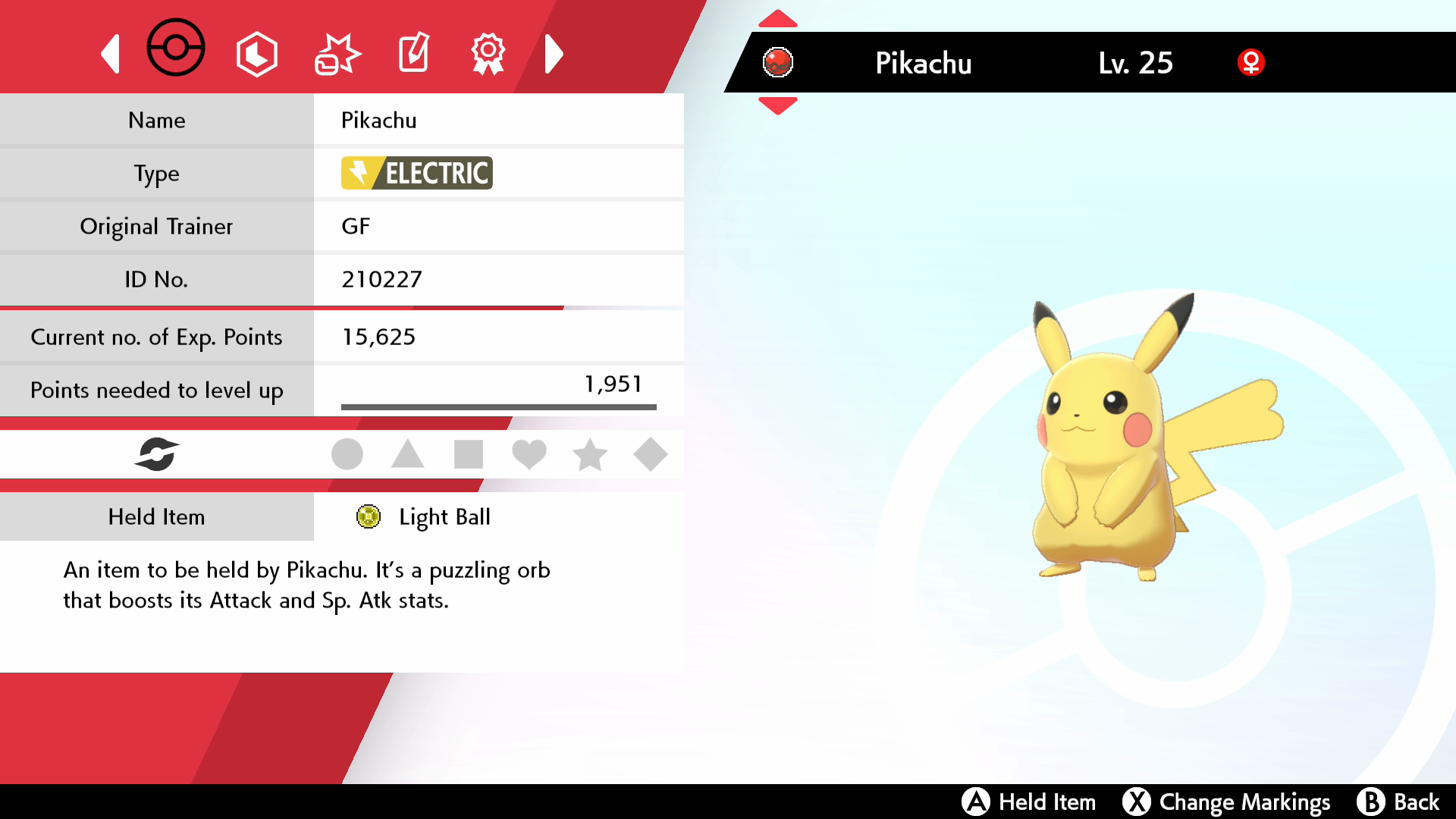 Bellevue, Wash.—FEBRUARY 11, 2021— Pokémon unveiled plans today for a virtual music concert celebrating its 25th anniversary. The pop-culture brand broke the news with help from headliner and Pokémon fan Post Malone in a video that can be seen here: https://youtu.be/wtQx4R2M2iw/
.

Taking place on Saturday, February 27—better known as Pokémon Day—the event will be an online party not just for Pokémon fans but for all music fans around the world. It will also serve as the launch activation for the franchise’s yearlong P25 Music program. The Pokémon Company International has teamed up with Universal Music Group to bring this concert and more music surprises to life throughout 2021 as part of P25 Music. P25 Music is a collaboration with some of music’s biggest names to create new songs, styles, and pop-culture moments, all through the lens of Pokémon. Pop icon Katy Perry was announced last month as the program’s premier artist.

“I’ve been a Pokémon fan for a long time, so the opportunity to headline the Pokémon Day concert celebrating 25 years is awesome,” said Post Malone.

The concert will be free to view on the official Pokémon YouTube channel, Pokémon’s official Twitch channel, and on Pokémon’s 25th anniversary website beginning at 7:00 p.m. EST / 4:00 p.m. PST on February 27. Pokémon will unveil more P25 Music details at the end of the concert, so fans will want to tune in for more upcoming collaboration surprises.

In anticipation of the concert, The Pokémon Company International will host several celebratory activations across the brand in the week leading up to the virtual music event. In addition to the previously announced Pokémon GO Tour: Kanto event on Saturday, February 20, The Pokémon Company International will distribute a special password on February 25 for players of the Pokémon video game franchise to add a special Pikachu to their Pokémon Sword and Pokémon Shield games. In keeping with the music theme for the year, this Pikachu knows the move Sing, which it can’t ordinarily learn. On February 27, fans can tune in to Pokémon TV, either on the web or by downloading the app, for a curated selection of music-themed episodes of the popular Pokémon animated series as they prepare for the big Pokémon Day concert with Post Malone in the evening. Fans can expect more announcements that week from across the franchise.

To stay up to date on all the latest news as Pokémon celebrates 25 years, fans can visit Pokemon.com/25 and join the conversation online with #Pokemon25.

About Pokémon
The Pokémon Company International, a subsidiary of The Pokémon Company in Japan, manages the property outside of Asia and is responsible for brand management, licensing and marketing, the Pokémon Trading Card Game, the animated TV series, home entertainment, and the official Pokémon website. Pokémon was launched in Japan in 1996 and today is one of the most popular children’s entertainment properties in the world. For more information, visit www.pokemon.com.

About Universal Music Group
Universal Music Group (UMG) is the world leader in music-based entertainment, with a broad array of businesses engaged in recorded music, music publishing, merchandising and audiovisual content in more than 60 countries. Featuring the most comprehensive catalog of recordings and songs across every musical genre, UMG identifies and develops artists and produces and distributes the most critically acclaimed and commercially successful music in the world. Committed to artistry, innovation and entrepreneurship, UMG fosters the development of services, platforms and business models in order to broaden artistic and commercial opportunities for our artists and create new experiences for fans. Universal Music Group is a Vivendi company.
Click to expand...

Lie About the User Above

Guess the above Pokémon's English Name!

What type(s) would the above user’s avatar be?