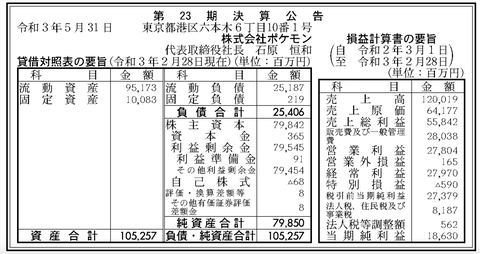 Entertainment companies around the world have seen groundbreaking profits during the ongoing global pandemic, as families find themselves stuck at home and needing to keep themselves occupied. Figures published in the Japanese government's Official Gazette, and reported on by the unofficial Kanpo Blog (官報ブログ), reveal The Pokémon Company has attained record sales and profits over the 2020 Japanese financial year (1 March 2020 - 28 February 2021).
While the Official Gazette has given The Pokémon Company's net profit figures in previous years, 2020 is the first time that fuller figures have been published. As a private company, The Pokémon Company is not actually obligated to give a complete outline of its financials in this manner. It should also be noted that the figures reported here represents only the business activities of The Pokémon Company itself. These sales figures for example explicitly do not include sales of officially licensed Pokémon merchandise that may have been made by other companies.

While these represent record figures for the company, it's likely that 2021 may reach even higher. Consumers' pandemic induced discretionary spending, as seen in the continuing shortages for Pokémon TCG products, is expected to continue throughout the 2021 financial year, and the company will also benefit from the release of a number of major Pokémon titles, including the already released New Pokémon Snap, Pokémon Brilliant Diamond and Shining Pearl in November, and Pokémon Legends: Arceus in January 2022.

What would the Above User's Partner Pokemon be?

Which Human Character from the Pokemon World comes to mind for the user above?