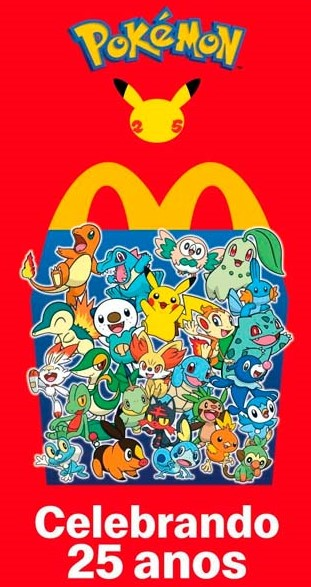 It's not just the Aussies who get to enjoy Pokémon-themed food promotions this week. Starting this Thursday, September 9, Pokémon fans in Brazil will also have the opportunity to pick up Pokémon cards and toys together with their McLanche Feliz meals.

Each of the Pokémon Happy Meals includes a pack of 4 Pokémon cards, with one card per pack being a Confetti Holo. On top of the cards, fans will also receive an additional toy item, which appears to be the same items from the US versions of the Happy Meal. The 2021 McDonald's Collection set of Pokémon cards features 25 cards reprinting all feature starter Pokémon from various Pokémon TCG expansions from the Black & White, XY, Sun & Moon, and Sword & Shield Series in both Non Holofoil and Confetti Holofoil versions, for a total of 50 cards in the set. Each card retains its original layout, with the 25th Anniversary logo on the bottom right corner of the card's artwork.

Pokéfans in Brazil look to be in a similar situation to the Aussies, with McDonald's stores allowing the toys to be purchased separately to a meal, which could allow for a repeat of the rampant scalping of the cards that was seen in the US earlier this year.

HT to Elite4Diego on Twitter for bringing this one to our attention.