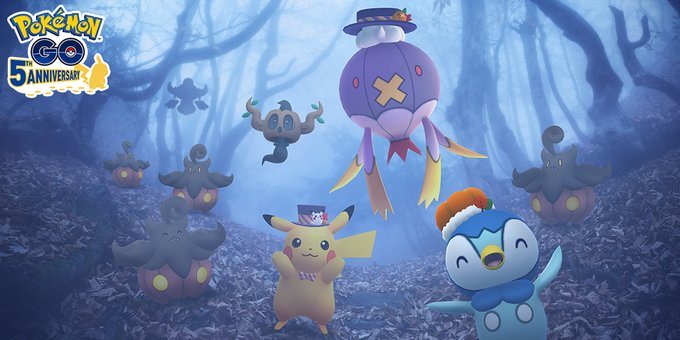 Niantic has announced details for the Halloween 2021 event, Halloween Mischief, which starts in Pokémon GO at October 15, 2021, at 10:00 a.m. local time, running through to October 31, 2021, at 8:00 p.m. local time. The event will be split into two parts. The Season of Mischief also continues with two new events in each part of the Halloween events.

A remix of the iconic Lavender Town music will be playing in-game nightly throughout the event. Players can also receive 2× Transfer Candy, 2× Catch Candy, and 2× Hatch Candy bonuses, and a guaranteed Candy XL when walking with their buddy.

Trainers will be able to get Halloween-themed stickers by spinning PokéStops, opening Gifts, and purchasing them from the in-game shop. The following new avatar items will be available to purchase in the in-game shop starting on October 14, 2021, at 1:00 p.m. PDT (GMT −7) and will continue to be available after the event ends:
Additional "spooky" bundles will also be available for purchase in the shop throughout the event:
A Special Research story, What Lies beneath the Mask?, will be available, focusing on Ghost-type Pokémon, most notably Yamask. There will also be Timed Research, with tasks focused on participating in the Halloween Cup in the GO Battle League.

Part 1: Creepy Companions:
Runs from October 15, 2021, at 10:00 a.m. to October 22, 2021, at 10:00 a.m. local time
The first part is themed around creepy companions, focusing on Psychic- and Poison-, type Pokémon that can't wait to be encountered and befriended, as well as other friendly, creepy Pokémon.

The next part of the Season of Mischief Special Research story, Misunderstood Mischief, will unlock. Strange Pokémon are appearing in Pokémon GO, including Pokémon originally discovered in the Galar region like Galarian Slowking. Could this be a result of Hoopa's rings? Let's tackle this mystery together and learn more about Hoopa!

Part 2: Ghoulish Pals:
Runs from October 22, 2021, at 10:00 a.m. to October 31, 2021, at 8:00 p.m. local time
In the second part, Ghost types will be appearing more often everywhere as we get closer and closer to Halloween. Phantump, Trevenant, Pumpkaboo, and Gourgeist will make their debuts in Pokémon GO. With the introduction of Pumpkaboo comes a new mechanic to Pokémon GO: Pumpkaboo and Gourgeist that are larger will actually look larger in the game. There are four varying sizes; Small Size, Average Size, Large Size, and Super Size. In celebration of Pumpkaboo's debut and the mechanic it introduces, a Collection Challenge will be available that requires you to collect Pumpkaboo of various sizes.

The next part of the Season of Mischief Special Research story, Misunderstood Mischief, will unlock. Professor Willow has a frightening but eye-opening encounter with some Phantump and Trevenant in a forest! This reminds him that Hoopa is also a Ghost-type Pokémon, so perhaps this is the perfect opportunity to do more research on the spooky, spectral Pokémon around us.