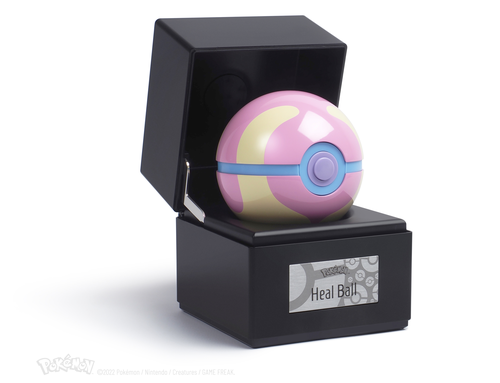 Continuing their collaboration with The Pokémon Company International, The Wand Company has announced four new Poké Ball varities that will be coming to their range of Poké Ball replicas in 2022. In addition to the Heal Ball which will be launching in February, fans will also be able to get their hands on replicas of the Friend Ball, Quick Ball, and Cherish Ball. All of The Wand Company's Die-Cast Poké Ball Replicas feature proximity and motion-sensing, making the balls glow with multicolored lights when they are picked up, and include a stainless steel ring for display. Each ball is also packaged in it's own uniquely numbered presentation case.


Chris Barnardo - CEO of The Wand Company said:
“It’s a pleasure to continue our partnership with The Pokémon Company International in sharing more of these gorgeous Poké Ball replicas with fans. Each replica is created with the utmost attention to detail and craftsmanship, and is sure to be a wonderful addition to any Pokémon collection.”
Click to expand...

The first replica from this new set, the Heal Ball, is available now for pre-order from Pokémon Center, and from participating retailers across North America, Europe, Australia, and New Zealand. Other designs will be released throughout the rest of the year, with the Friend Ball, Quick Ball, and Cherish Ball receiving an exclusive early release for Pokémon Center customers, who will receive their replicas a full month before these are made available at other participating retailers.

Cindy Ruppenthal - Senior Director of e-commerce at The Pokémon Company International said:
"The incredible response to The Wand Company’s first series of stunning Poké Ball replicas inspired us to release another premium range, featuring iconic Poké Balls that have appeared throughout the Pokémon franchise. As Trainers of all ages have a huge passion for collecting, we look forward to delivering new Poké Ball replicas as a one-month exclusive on Pokémon Center."
Click to expand...

The collaboration between The Pokémon Company International and The Wand Company for a range of Poké Ball replicas was first announced in November 2020. Over 2021, they released replicas of a range of different Poké Ball designs, including the classic Poké Ball, as well as the Great Ball, Ultra Ball, Master Ball, Premier Ball, and Dusk Ball. The Heal Ball was first previewed at MCM London Comic Con in October last year, alongside pre-orders for the Dusk Ball. The designs from the first wave are set to see re-releases throughout 2022 at Pokémon Center and participating retailers, including at retailers which missed out on the initial release wave. Notably, the Master Ball design will be available from Pokémon Center UK for the first time this year.

ZinnLav Feb 2, 2022
Very tempting, I remember seeing the standard Pokeballs in store but wanted one of the special ones so I decided I'd wait and hope.
No Luxury Ball yet it seems, but Cherish would be pretty cool.
Join the discussion on the Forum (Requires registration)
The Original Pokémon Wiki
45,000+ pages
over 3.5 million edits
Browse now
Community