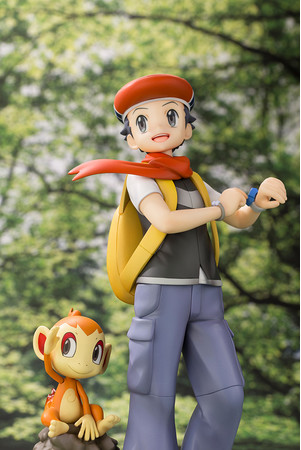 KOTOBUKIYA has opened preorders for the latest figures in their Pokémon Series ARTFX J collection, set to be released in Japan in July. Lucas, the well-loved male protagonist of the Pokémon Diamond and Pearl games, is featured in this figure standing with his partner Pokémon Chimchar. Lucas is wearing his Pokétch and signature red scarf, while Chimchar is sitting on a rock. The Poké Ball on the figure's base is coloured blue, in a match the colouring used for Pokémon Diamond.

Sculpted by ko_nen(modeloft) and Tobe, the characters are reproduced in this figure at a 1:8 scale, with Lucas standing at 202mm (~7.95in) tall, and Chimchar at 70mm (~2.75in) tall. Their pose is based on an illustration by Hitoshi Ariga, who has designed many Pokémon, illustrated 116 Pokémon trading cards, and served as a designer on 6 Pokémon games.

Japanese preorders for the new figure set are open right now on Animo, an online storefront specializing in anime and manga goods, at ¥12,980 (~$111.61 USD). Release schedules for international markets have not been announced, and will depend on individual local retailers. 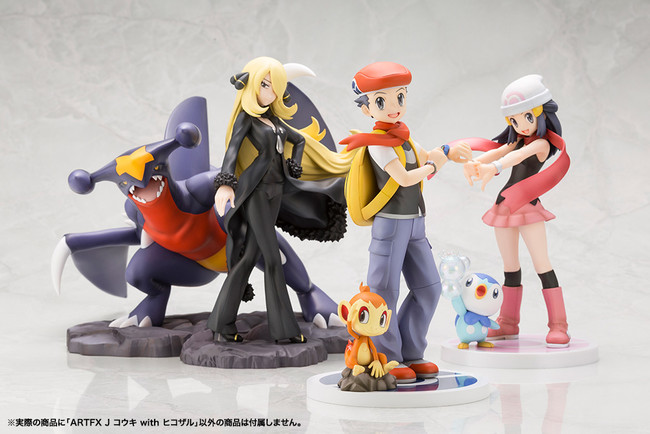 The ARTFX J collection was first launched back in November 2016, with the release of Red and Pikachu. Lucas is the third Sinnoh-based trainer to receive a release in this series, after Dawn with her bubble-throwing Piplup in July 2020, and Cynthia with her Garchomp in September 2021.

EternalPokéFanGirl Mar 17, 2022
Excellent work as always Takoyaki! Those figures look splendid, I would love to have them all. But although Lucas is the protagonist of the article, I have to say Cynthia would be my first option .
Reactions: takoyaki and FelipePR

EternalPokéFanGirl said:
Excellent work as always Takoyaki! Those figures look splendid, I would love to have them all. But although Lucas is the protagonist of the article, I have to say Cynthia would be my first option .
Click to expand...

Thank you very much!! All of them look great really, I think I'd prefer to have the Dawn one--I've never collected figures before, so maybe someday I'll get one~
Reactions: EternalPokéFanGirl
Join the discussion on the Forum (Requires registration)
The Original Pokémon Wiki
45,000+ pages
over 3.5 million edits
Browse now
Community

A Pokemon Sharing a Type With...