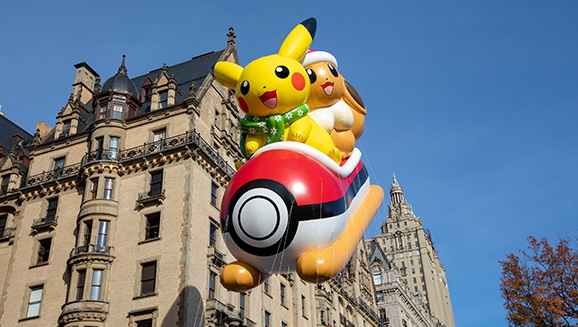 For the second year running, Macy's Thanksgiving Day Parade will include a holiday themed balloon featuring Pikachu and Eevee riding in a giant Poké Ball-inspired sled and wearing winter clothing. The Macy’s Thanksgiving Day Parade will be broadcast in the United States live on NBC, and livestreamed on Peacock, starting at 9am in all US time zones.

Pokémon has long been part of the Macy's Thanksgiving Day Parade, with the introduction of the original "Flying Pikachu" balloon dating back to the 5th anniversary of Pokémon back in 2001. That original balloon was retired in 2006 in the August 2006 Party of the Decade in New York City's Bryant Park as part of Pokémon's 10th Anniversary Celebrations. A second Pikachu balloon debuted in the 2006 parade, featuring glowing cheeks, and chasing a Poké Ball balloon. The third, introduced in the 2014 parade, wore a green scarf, and held a small, Pikachu-shaped snowman. Pokémon have also featured in ground based floats, such as with the appearance of Reshiram and Zekrom in the 2010 Parade ahead of the release of Pokémon Black & White the following year.